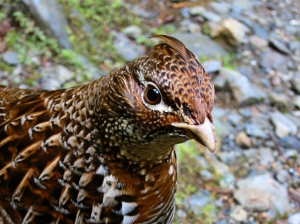 We have been having an unusual encounter with at least one ruffed grouse at Hammer’s Hill, our Appalachian mountain farm.  It could be as many as three.

Generally, ruffed grouse are secretive birds.  Because of their camouflage, they are hardly ever seen.

But not this one (these ones.)  He (they) appear/appears without a sound, walks up to us, encircles us, and then starts to peck at our pants.  He/they is/are not to be scared off.  Even the presence of a dog is not a deterrent for hanging around.  It has been mating season, so maybe we are invading his territory. We have tried to make his life difficult be putting him in a cage.  He still comes back after being released.

Which all goes to show that there is not much you can do with an irritated grouse, but grin and bear it.

And that is what we have to do sometimes:  just grin and bear it, and just be comforted by the knowledge that everything is in a state of change, even with irritated grouse.